Working together to keep children safe: the police point of view

Chris Neely was immersed in the police force from a young age as his father was a fingerprint expert, so joining up himself was always his career ambition. Now 28 he has achieved that dream having studied criminology at university and worked as a PCSO for three years before becoming a fully-fledged officer with British Transport Police. Based in Manchester, Chris has worked directly with Railway Children in supporting our work to keep children and young people safe on the network so knows first-hand the difference projects like ours can make. 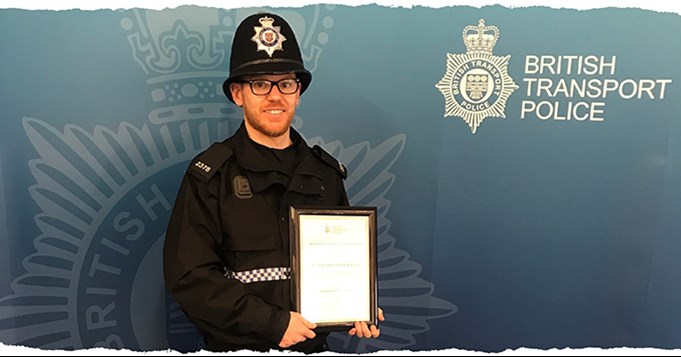 He said: “I always wanted to be in the police and I do love it. I know it’s a cliché but no two days are ever the same. It is incredibly challenging but incredibly rewarding at the same time. Manchester is the number one location for incidents of children and young people being identified as being at risk and knowing how to spot that and how to react is such an important part of our role.”

With the BTP Chris has been trained in safeguarding and has played an important part in creating the station community that we are establishing in order to spread that awareness. He went to our first ‘Safeguarding hub’ meeting and is a great ambassador for Railway Children, our vision and the work we are doing together to achieve it.

“We deal with so many different incidents of vulnerability.”

“Having projects like the one based around Manchester are vital to intercept those at risk before they end up in serious harm,” he added. “Many of them are running away. I suppose if that’s what you want to do and you want to cover a decent distance, but are too young to drive, then the train is a good bet. Not only that, stations are warm, well-lit, often open 24 hours and full of other people – that is pretty attractive to someone who just needs somewhere to hide out for a while. The way BTP is now working with Railway Children ensures that they are also safe places. A lot of these young people run from care homes or from situations that are already dangerous.

“They have no money, no ticket and often no particular plan of what to do next.”

“Just last night we picked up a couple of lads who had just decided to do an all-nighter hanging out at the station. They were 14 and 17 and while they weren’t necessarily ‘missing’ neither of them had any money or even a phone on them. We were alerted by rail staff so stopped them at Manchester and tried to explain why it just wasn’t the place for them to be. When we’ve done that, it’s good to know that the case will be passed on and followed up by Railway Children to get to the bottom of the problem, find out why they were doing it and stop them from putting themselves in danger again.

“We need to keep spreading the message to the public too.”

“As a police force we’re all aware of the issues and risks to children but I would urge anyone who sees or hears something that doesn’t seem right or just makes them feel uncomfortable to report it. We’d much rather go and check something out and find out it was nothing than not to have checked in the first place.”