Alone at the station, Jagdish was in real danger.

When 14-year-old Jagdish was spotted alone at Salem Railway Station, Railway Children's outreach team knew he was in danger. India’s chaotic rail network is an ideal hunting ground for those looking to abuse and exploit vulnerable children – and with a child arriving alone on a platform every five minutes, there are so many at risk.

But Jagdish was one of the lucky ones. Our team saw him sitting alone and spoke to him, listening as he explained how he was trying to get to Tiruppur to meet his father. He told us that his father worked on a building site there but he didn’t know the exact address or which train he needed to catch. Knowing the danger he was in at the station, we took him to our shelter nearby to keep him safe, give him something to eat and drink and start to understand his situation. 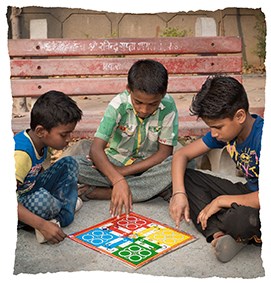 Angry, aggressive and lashing out – until he learned to trust us.

Staying at the shelter for a few weeks, Jagdish struggled to control his behaviour. He was aggressive with other children and with staff and it became obvious that he didn’t trust anyone. But the Railway Children team kept talking to him, kept reassuring him and kept engaging him in activities until finally he calmed down and started to tell us the truth.

Railway Children found out that the only phone number he had ever shared was not for his family, but for a friend who worked in a mechanic’s workshop. Jagdish had worked there too and spent the rest of his time roaming the streets with his friend, having dropped out of school in the seventh grade. Eventually he explained that his mother, had married very young and felt unable to cope when he was born – leaving Jagdish with his uncle and moving away to work in the textile industry in Tiruppur.

Finding his family, and bringing them back together

Jagdish and his uncle had not got on well – the teenager felt abandoned and was angry and argumentative. His behaviour was increasingly bad and eventually his uncle gave up trying to control him which is when Jagdish took to the streets. He had no idea how to get in touch with his parents but Railway Children visited his hometown and spoke to the local community, contacting elders and authorities and eventually tracking down his mother and step-father. They had no idea what had happened to Jagdish and were happy to be reunited with him. The team worked with the family to make sure they were able to take care of him properly and soon Jagdish was re-enrolled at school too.

Railway Children has been doing follow-up work with the family and Jagdish’s step father even took a week off work to make sure the boy settled back home well. Both adults are getting support in parenting and Jagdish and his family are happy and safe together.