Neil’s home-life was one typified by chaos.

He was brought up in Salford between parents that had separated from a violent and abusive relationship. His dad had alcohol problems that led to terrible fights with his mum – Neil has seen her get badly beaten and she still has mobility problems caused by bones that were broken in her arm.

By the time he was 12 Neil was keen to find escape from his traumatic life. He started spending more and more time away from home and got involved with gangs of older children. Soon he was shoplifting and staying out all night, often in the company of a 14-year-old girl he was close to. His mum struggled to control his behaviour and as Neil got more and more involved with the girl and her family he was disappearing for longer periods of time.

Eventually Neil was taken in to care, and moved out of the area, in order to try and break the ties of what was a worrying relationship. The authorities felt that the girl’s family were using her to groom Neil – luring him away from his family under the pretence of friendship and affection.

All too often organised gangs use children in this way to recruit other children to then be sexually exploited and abused. 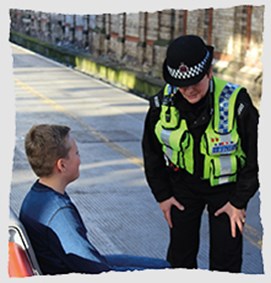 With his effortless charm and baby-faced good looks, Neil was an obvious target but not understanding the danger he was in, and not accepting the reasons he had been moved, he kept running away from the home to get back to Salford and the people he thought were his friends.

Sometimes care homes hide the shoes of children at night to stop them running away and one night British Transport Police spotted Neil, barefoot, begging passengers at Piccadilly Station for money.

They could see the danger he was in immediately so stepped in, took him back to the care home and referred him to Railway Children for further support.

Since then our team has been visiting Neil regularly and helping him to understand the risks he has been taking. We’ve met up with his mum, who is desperate to have him home, and we’re helping her work out how she can support him too.

Neil can only go back to his family once we know it is safe.

He is starting to understand that, and distance himself from the people he was hanging around with before, and step by step we’re getting closer to being able to see him and his mum reunited.