Throughout 2013, Girlguiding UK members were challenged to become Girls in Action.

Girlguiding UK joined forces with five UK charities who have created projects for members to learn about issues that blight the lives of girls and women in the UK and around the world, and empower them to advocate, volunteer and raise awareness to make the world a better place for girls.

Railway Children was one of the chosen charity partners, and produced a project called 'Making the Invsible Visible', which explored what makes children in the UK run away from home, the dangers they face, and why girls are more likely to run away than boys. It provided the opportunity for Girlguiding UK members to learn how they can help to keep their friends safe. 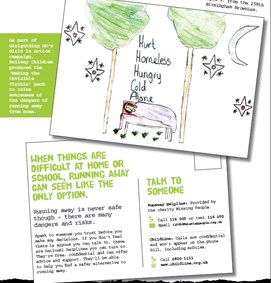 As part of the 'Making the Invisible Visible' pack, we ran a postcard competition and invited units to submit designs drawn by the girls to help educate other young people. You can see some of their designs below.

We also created a poster for children and youth groups, warning them about the dangers of running away.

The winning drawing was by Charlotte Francis, aged 9, from the 258th  Birmingham Brownies. Congratulations Charlotte!

A poster you can print out and share with children and youth groups, warning them about the dangers of running away.

A handy poster to promote your event.

Lots of ideas and tips to kickstart your fundraising.