For the second year running, the Rail Rugby charity tournament took place at the world famous birthplace of the sport, Rugby School in Warwickshire. With the support of Network Rail, 14 teams from across the industry came together on 2nd June, each hoping to seize the title from last year’s winners VolkerRail and become the 2016 Rail Industry Touch Rugby Champions. 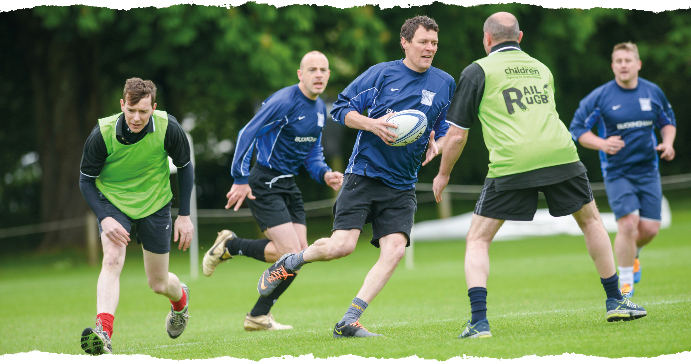 “The success of last year’s inaugural tournament was always going to be a tough act to follow, but the enthusiasm and extraordinary commitment from our rail industry supporters was outstanding, ensuring a great day and £70,000 raised for vulnerable street children. A big thank you to everyone who contributed to making the event such a success, in particular our tournament sponsor VolkerRail and Nuffield Health for giving amazing sports massages.” The tournament is the brainchild of Katie Ferrier, a Senior Programme Manager at Network Rail, who said: “The continued success of this charity tournament is an inspiring response for a great cause and its significance goes beyond the money alone. At the heart of this event’s success is the generosity of the competitors and volunteers involved, all coming together and helping to give a louder voice to the millions of street children across the world.”

VolkerRail were unable to replicate their excellent form of 2015 and defend their title. Instead, Morson International were ultimately triumphant, overcoming some stiff competition and beating Ernst & Young in dramatic style in the final. They were presented the trophy by Stuart Birch, Director Major Projects at VolkerRail.

The day concluded with an evening with rugby legend Kyran Bracken, sponsored by ABC Electrification in aid of Railway Children. All funds raised from the event will go to the charity’s work helping vulnerable children around the world.