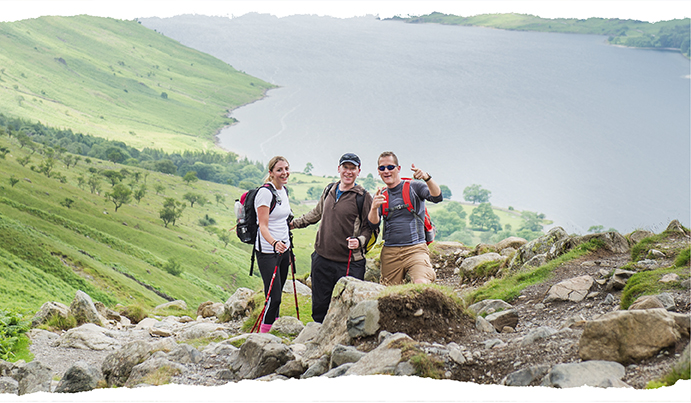 The 2016 Three Peaks Challenge has raised close to £165,000 for the charity Railway Children, which supports children at risk on the streets. Since its launch in 2004, the annual event has now raised £2.4 million, helping the charity reach 5,000 new children in need every year across the world, providing shelter, food, clothing, medical supplies, education and counselling.

The famous endurance challenge, now in its thirteenth year, began on Thursday 23 June and involved 150 charity mountaineers prepared to take on Ben Nevis (1134m), Snowdon (1085m) and Scafell Pike (978m). The team from the Department for Transport achieved the fastest time this year, completing the combined 11,200 feet of climbing in just 13 hours 3 minutes and 30 seconds.

Katie Mason, Events Manager from Railway Children, said: “This year we introduced a new award for ‘Best Team Support’, which was won by Ashurst. One of their young team members, Michael Smith, lost most of his sight a few years ago, yet still managed to climb every mountain with help from his team members, who talked him through each step. It was very emotional and inspiring when they crossed the finish line at Ben Nevis.

“The on-board crew of volunteers were amazing as always, preparing delicious food and refreshments. Their unrivalled commitment has been an integral part of everything we have achieved over the years. A special thanks also needs to go to one of our train drivers, who donated his day’s salary to the charity and the companies supporting this year’s challenge - Riviera, DRS, Network Rail, Ravenglass & Eskdale Railway, ATOC and Rail Gourmet.”

The aim for each team taking part in the charity’s unique Three Peaks Challenge by Rail is to raise a total of £3,500 to help fund outreach projects with street children in the UK, India and Africa. The team from Trans-Pennine Express raised a remarkable £26,352 and were winners of this year’s Three Peaks trophy for the top fundraising team.

A number of extra fundraising activities also took place to maximise funds raised, including £4,500 raised by selling tickets to train enthusiasts for the empty leg of the journey on board the ‘The Great Briton’ from Riviera Trains, travelling from Crewe to London; the onboard bar and raffle made £2,455; and £290 was raised by onboard volunteer physiotherapists soothing sore limbs.