A sadness in the eyes

Cat Gibson is a big supporter of Safeguarding Children on Transport (SCT). Now training and competency manager at Network Rail, Gibson was shift station manager at Manchester Piccadilly from May 2007 until March 2016. It’s a challenging job in one of the North’s biggest and busiest premier gateway stations. She talked to Andy Collis at Railway Children.

“I decided to get involved with the SCT programme because I was already the single point of contact with BTP for Piccadilly Station,” says Cat. “I had contacts with all 18 of the stations that Network Rail manages nationally, so I was well placed to extend the scheme…I thought if it’s worth doing here, it’s worth doing everywhere.”

Gibson sees the programme as a logical fit with proactive security mindfulness. Training is thorough and professional.

“The training builds on what I was already doing with BTP and the Counter Terrorism Unit and organisations like the Samaritans. It’s all about looking beneath the surface at what’s really going on. With young people it particularly equipped me to look beyond antisocial behaviour - to stop seeing the surface issue as if it’s the main issue - and to understand what might be going on to drive that behaviour.”

A case of conversation 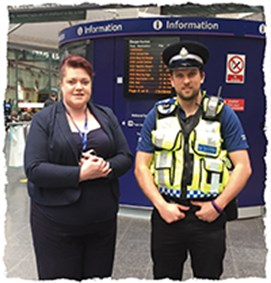 “The training provided me with a useful toolkit for starting conversations. That’s what we need to be doing at stations - not just to stop the behaviour or to move people on but to start a conversation and ask some questions.”

SCT training helps build confidence and bridge the gap between how effective people think they are - usually overly modest - and in fact how effective they can be. It’s a case of initiating conversations - often with people very different from yourself.

“Rail is a male-dominated industry. I think some of my male colleagues particularly felt a bit of fear about starting conversations with young people at stations - about how that would be perceived - but the training has helped give us the confidence and understanding to know we can and should be doing that.”

Sadness in the eyes

Haunting images from the course stay with Cat. “There a picture from the training materials that really sticks in my mind: it’s a young person sort of hiding - out of the way - in the sort of places we do sometimes see them at Piccadilly - like under a stairwell. It’s the sort of situation where you’d walk past and think ‘Uh oh! Trouble. What are you up to?’ When we did this with the group, everyone’s initial response was just that - that the young person looked like they were up to no good. But actually when you look at the picture more closely you can see bruising on the person’s face. And there is a sort of sadness in the eyes. So when you look again, you see so much more. I thought that was really powerful and my colleagues responded to that really well to.”

The SCT training is soon put to good use. Just weeks after attending a training course, Cat Gibson encountered a young man and a girl, 16, spending a lot of time at Manchester Piccadilly. “They were quite abusive to our staff. They’d shout and swear and say things like ‘you know you can’t touch us’. We worked with BTP to find out what was going on and to start that conversation.”

It turned out there were serious problems - including the relationship with the male - alcohol, and the girl’s care home, which planned to ask her to leave, citing antisocial behaviour. Following on from that initial conversation, helped by BTP and social services, the girl received remedial support and kept the place where she lives.

The value of the course in SCT lies in knowing what to do when confronted with outwardly recalcitrant youngsters at railway stations. It’s a basic skillset in non-threatening intervention.

“I believe that anyone who works on the frontline of the railway would benefit from the SCT training. It’s simple: Be Aware, Be Concerned. Look and look again. It’s not a complicated new skillset - the SCT trusts that you as frontline staff already have the key skills to deal with safeguarding issues. It simply gives you the confidence and structure to start a conversation where perhaps usually you would just walk past. We so often avoid getting involved because we don’t know what to do. This is an opportunity to gain that confidence and use the experiences we deal with every day to help vulnerable young people.”

Gibson brings the point home by urging staff to think about those close to them. “Think of your own family. Think of your children, nieces and nephews. How would you feel if they ended up on the streets or they came to a station because they had nowhere else to go? You would want to know that the rail staff would be there for them and would help them, wouldn’t you?”

Why do railway stations attract runaways and homeless children? Food kiosks are expensive. It’s more basic that that. “Our stations, and the railway in general, appeals to young people as a safe place to go. Stations are light and busy and much safer than the streets.” The runaways are already there. What the railway does about them reflects the industry as a whole. Frontline staff have an essential role to play. Certain behaviours have underlying causes not immediately apparent. Vulnerable adults and people with mental health issues make for stations too.

“Our staff are our key resource. Equipping them to deal with scenarios that present themselves every day is important for an engaged workforce. It also helps ensure that the railway is a safe place for everyone. Too many vulnerable children and young people pass invisibly through our stations every day. Who know what difference a simple conversation with someone who is willing to spend the time might make?”

“If you look at the bigger picture again, building a strong workforce, that’s not afraid to have difficult conversations, has benefits in many ways.” Not least it can make a lifetime’s difference to younger, more vulnerable people at stations.

At Manchester Piccadilly enthusiastic staff, alert to the dangers young people face, are starting conversations, looking again rather than dismissing what looks like antisocial behaviour.

“I’ve seen so much at Piccadilly over the years - especially on night shifts. There’s one incident that really sticks in my mind - from years ago. It was about 03.30 on a Saturday morning. The station was full of drunk young people hanging around. I was called to give first aid to a young woman. I didn’t ask her age, but I could see she was really just a teenager. Her face was really cut up. I needed to clean her injuries but she said, ‘don’t touch me - I’m HIV positive’. I persuaded her that it was ok and anyway I had gloves on.

“She let me help her and talked to me a bit. I asked her how she got hurt and she said ‘at work’. She was working in the sex industry. She called herself a dancer. I gave her the number for MASH - a sexual health charity. This was before the SCT training and before our work with Railway Children. I don’t know what happened to her - or if she accessed any help - but I still think about her.”

The programme has seen different elements of the railway - station staff, train crew and police - coming together to make a real difference. Supporters hope the programme will be expanded across the rail network. A recent SCT Champions training day in Leeds was a great success. More are planned.

To get involved contact SCT@railwaychildren.org.uk or find out more here.