A group of young people, some of whom have previously run away from home or care, have spent the last three months enjoying taking part in a brand new radio project launched and funded by Railway Children.

The young people, aged 15 and under, have been working with professional producers and DJs at Unity Radio, as part of the grassroots station’s ‘Next Gen Youth’ radio project. 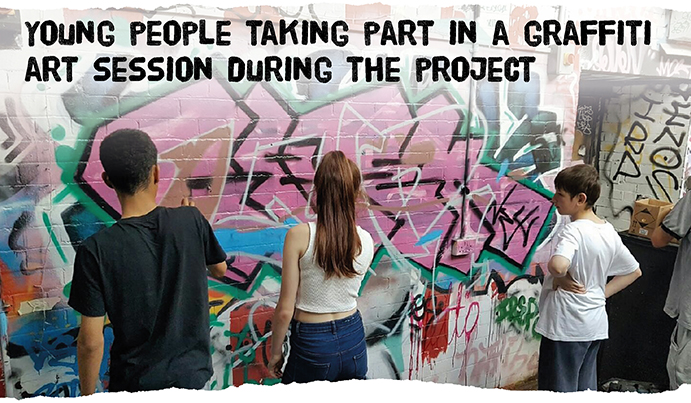 As well as receiving media skills training, they got their hands dirty at an urban arts taster day where they tried out graffiti art, went live on air at Unity, and got advice from urban artists and musicians. The course also helped them to achieve an Arts Award Bronze level qualification

As a grand finale to the project, the group have been busy producing their own two-hour radio show, which is scheduled to be broadcast live on Thursday 15th September at 7pm on Unity Radio (92.8FM and www.unityradio.fm).

The special broadcast will feature interviews with a professional MC, Merseyside Police and the charity Liverpool Young Runaways, as well as a radio drama on the issues of running away and exploitation and their own music playlist.

And here are a few comments from some of the young people who took part:

It’s the best, I’ve really enjoyed it and would like to do more.

In today’s session I felt good because I spoke on the MIC.

Very interesting – liked going on air…was a little frightening at first, but got more confident.

Awesome…being at a radio station – would like to come again.

I feel excited when I come to Unity Radio because it’s good to have a radio experience and exciting to learn how radio works.

Sarah Lanchin, UK Programme Manager at Railway Children, said: “The young people have done amazingly well and in just three months they are putting together recordings that are professional and interesting. It has been a wonderful opportunity to support this project and see what these young people can do when given the right opportunity to express themselves, work as part of a team, gain valuable skills and build their confidence.”

The initiative has been run in partnership with grassroots station Unity Radio and Liverpool Young Runaways, which is run by Action for Children.