As we celebrate National Volunteer’s Week in the UK, organisations across the country are acknowledging and appreciating the thousands of people who give so much of their own time and energy to help others. So at Railway Children we’d like to do the same, especially as there is one man in particular whose endless support we’d be lost without. 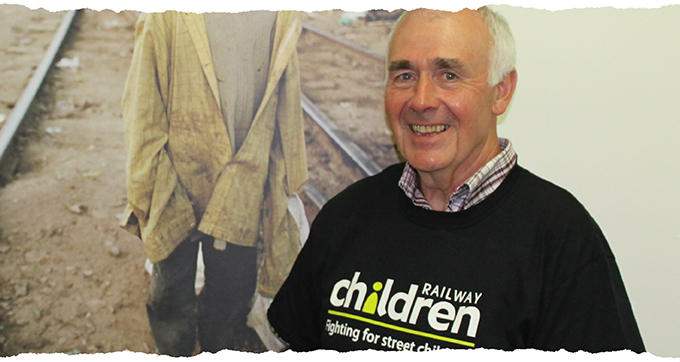 Frank Gillies has been a regular sight in the Railway Children office since 2004 - longer than most of the current staff. His 13 years of dedication to our charity started just six weeks after he retired. It wasn’t much of a break, but for a man who’d worked hard for 37 years in the rail industry, Frank wasn’t about to take retirement sitting down. So instead he started volunteering with us one day a week and he’s never looked back.

It all began when Frank spotted an appeal for an extra pair of hands in a church newsletter. Living in Audlem with his wife Sue, it was an easy thought to pop to the Railway Children office, at that time in Crewe, a couple of times a week to help with some admin.

He said: “I’d worked in the rail industry all my life. At first in London and then in Crewe and then back in London again. Then I’d taken an early redundancy but I wasn’t mentally prepared for retirement so I thought it would give me something to do and hopefully a feeling of satisfaction too. I liked the idea of doing something to help. It was supposed to be for two days a week over the summer… so I suppose it’s been a long summer as I’m still here!”

When Frank first came to the aid of Railway Children, we had just two full time members of staff and a small team who were juggling a lot of administration at the same time as trying to raise funds and support projects to help street children. Straight away he was invaluable. Frank quickly became a dab hand at compiling reports, liaising with donors and organising Gift Aid claims, roles he still takes on today.

“I suppose I’ve done a bit of everything over the years,” he said. “There’s a phrase we used in the rail industry ‘work as required’, and that’s pretty much what I’ve done – everything from inputting details of payroll giving to moving furniture and putting up shelves when we moved offices. But I enjoy it. I like being involved with the charity and I feel very proud to see how it has gone from strength to strength over the years.”

At the end of 2016 Frank joined the Railway Children team that organised and ran a hugely successful international conference in Tanzania. Bringing together experts on street children from around the world to share information and compare approaches was a big task, and Frank ably assisted to make sure the first-of-its-kind event in Dar es Salaam went smoothly.

He said: “I’d never been to Africa before but after so many years with Railway Children I understood the work we do there and the challenges we faced. It was different seeing it though. As we travelled through the country you could get a real sense of the poverty and deprivation. I talked to one of the photographers at the conference who told me how he had run away from home at the age of about five and lived on the streets himself. Hearing him talk about it first-hand made it all the more real. His parents had been told by a village elder that he had died so no-one came looking for him. It was only as a young adult that he was able to return and find them.”

Frank’s trip to East Africa filled him with renewed determination to do whatever he could to help, and now aged 69 and with five grandchildren, he has no intentions of ‘retiring’ any time soon. Which is lucky, as the Railway Children team would be lost without him!

Group Chief Executive Terina Keene said: “Frank is pretty much a Railway Children institution. He’s a great support to us in the office and has been for so long now that I’m not sure what we’d do without him. He’s one of the team and we can’t thank him enough for everything he does.”

So from everyone at Railway Children, this National Volunteers’ Week and every week… ‘Thanks Frank!’

help us reach more children in danger on the streets