The Department for Transport has just launched a new scheme that will help train companies make the UK’s railway stations safer places for vulnerable children. 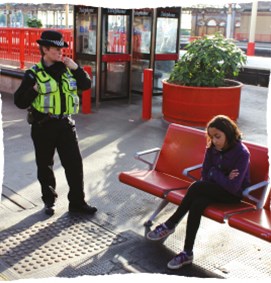 Welcoming the fact that the importance of safeguarding is now a mandatory part of the franchise process, Railway Children’s Business Development Manager Suzanne Parsons said: “About 100,000 under-16s run away each year, with many becoming vulnerable to grooming and sexual exploitation and areas surrounding major stations are a particular concern. This scheme represents a breakthrough in changing lives on the transport front line, with improved rail staff awareness and confidence in how to respond when suspecting a young person is at risk.”

One child runs away from home every five minutes in the UK and it is estimated that 16,500 children are at risk of sexual exploitation every year.

Figures show that British Transport Police handled nearly 5,000 child safeguarding incidents in 2016, of which a third were children who had run away or gone missing.

The new Department for Transport scheme, which covers all rail networks policed by British Transport Police, establishes standards of good practice and emphasises the importance of well-trained frontline staff. As part of their franchise agreement, operators will now need to demonstrate a commitment to safeguarding training and stations generating the highest number of safeguarding reports will also need to implement additional activity.

Find out more about Railway Children's Safeguarding on Transport programme.