Our work in India to keep children safe at the country’s chaotic and dangerous stations has seen us protect 300,000 children over the last 22 years. Our teams there have become such experts in the problems faced by these vulnerable children, and how to deal with them, that their input is vital to other organisations working in those areas.

Now the chairman of India’s Railway Board has launched a guidebook for all railway stations to follow that will ensure they become safer places for the children there. The document will act as the framework to be developed across all stations. It will help everyone in the environment identify and protect children at risk and acknowledges the work and support of the Rail Protection. 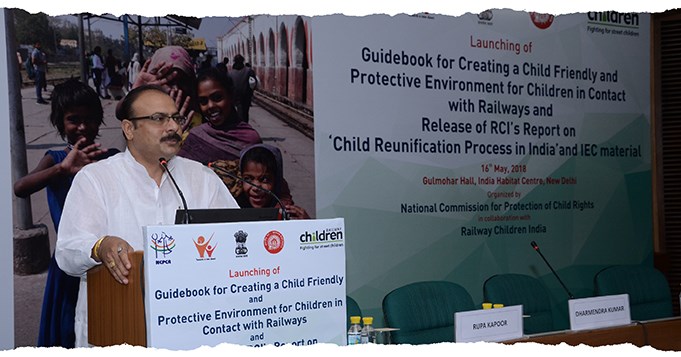 Filling in the gaps in child protection

The ‘Guidebook for Creating a Child Friendly and Protective Environment for Children in Contact with Railways’ was developed between Railway Children and the National Commission for Protection of Child Rights (NCPCR). Their chairman, Stuti Kacker, said: “There is a need to protect the children who run away from abusive situations at home or are lost and reach railway platforms, as they are extremely vulnerable to abuse by strangers. The guidebook will fill the gaps in the protection of children at railway stations.”

The launch of the guidelines will co-incide with an overall awareness campaign to make sure everyone working at or even passing through the station area knows how to react to and help a child at risk. Chairman of the Railway Board, Ashwani Lohani, said: “A large-scale awareness campaign to sensitise the entire railway staff and other stake-holders, like porters and vendors at stations, will be now be launched, in collaboration with the NCPCR.”

A step forward in our fight for street children

S. Navin Sellaraju, India Country Director for Railway Children, said: “This guidebook is a great step forward in our fight for the vulnerable children who are forced to survive in and around the hostile and chaotic railway environment. By following its framework, as well as increasing our awareness with the station communities, we can reach and protect even more of the children who desperately need our help.”