£23.93 could save a child like Isha from trafficking and abuse

When Isha* was just 10 years old her mother died and her father was left to look after her and her two older brothers.

The family had very little and both the boys worked as casual labourers to help bring in an income while Isha went to school. But all that changed when her father remarried and Isha was left in the care of her brothers while he moved away with his new family. Her brothers made her give up school so she could care for them and look after the house but they still had so little money that all three of them often went hungry. When the pandemic arrived and both boys lost their jobs instantly, the family was facing starvation.

One day a neighbour approached them and asked if he could marry Isha – who was just 13 by then.

Desperate for the dowry this would bring, and thinking their sister would have a better life with her new husband, the boys agreed and within weeks Isha was forced to marry a man of 41 who she detested.

He was controlling and abusive and rarely let Isha out of the house. He hit her when he wasn’t happy and the girl was trapped in a life of complete misery. 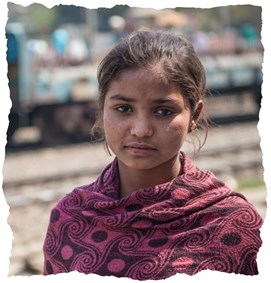 Eventually she decided she couldn’t take it anymore and ran away when she was supposed to be out buying food.

She made it as far at the station at Ghaziabad and that’s where our teams found her – distressed, hungry and with no idea where to go next.

We found her a bed in our shelter and started working with her to find out what had happened.

After a while we were able to track down her brothers – who had no idea what had happened to their sister – and take her back home to them. They never knew about the abuse and realised they had made a terrible mistake, welcoming Isha back into their home.

Our teams have continued working with the family, ensuring the boys both have an income and the resources to support Isha while she finishes her education.

Now they understand about the dangers of child marriage and the importance of education and the three siblings are a stronger, safer family unit.

Please help us reach more children like Isha with a gift today.

£23.93 could save a child from trafficking and abuse in India.

*Names and identities have been changed.