Coronavirus response: Our Work in India

India was among the world's worst-hit countries when coronavirus outbreak began.

Its already fragile communities, where millions rely on daily wages, were left with no jobs, no income and often no homes the minute the outbreak began. Almost 22% of the population live below the poverty line and it was mainly these families who lost all income when the virus arrived.

Many are now being forced to survive in growing slum communities – many of which are established alongside the railway stations. As we have an established presence there, our teams have now adapted their approach and are working within the slums to find the children and families that need our support.

As the world starts to recover from the pandemic, these families are facing a desperate struggle to rebuild their lives. Hunger is now more of a threat to them than the virus as they still have no income and more children than ever are expected to leave school, be trafficked, forced into marriage or take on jobs as child labour, just so they can eat. We’re doing everything we can to strengthen and support those families so that their children stay safe with them at home.

When the virus first hit India, our teams identified over 10,000 families of children we had taken back home over the last year, and found them in desperate situations. 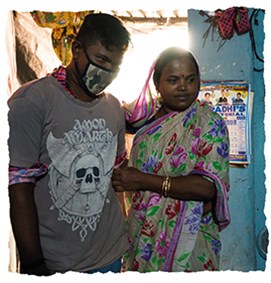 The impact of coronavirus will be felt across India for generations, leaving millions of children and families in dire situations.

Vikas was one of those children. His father had been paralysed for several years and his mother supported the family – until the lockdown meant she could no longer work. 17-year-old Vikas also lost his job in a clothes shop.

Read more about how we are supporting families like Vikas' >

How you can help us keep children safe

The demand on our services is already increasing as children and families face additional pressures and burdens. Our project teams will always keep doing whatever they can but as a charity we are already facing the prospect of operating with a reduced income.

Your continued support at the moment is not only vitally important it is also hugely appreciated.